The severity of omicron is still not well understood. The projections shown here use very optimistic reductions in severity. Both the probability of severe infection and the time spent in hospital are multiplied by a factor 0.3. Even with these reductions in severity, hospital demands will soon exceed previous record highs, and will continue to rise into the New Year.

Omicron is dominant or near dominant in several provinces as of December 16. BC, Ontario, and Quebec have sufficient large case numbers and clear interpretation to directly estimate the omicron growth rate and fraction of cases. For the other provinces, a growth rate of 25% per day is assumed for omicron, as measured in BC and Ontario. The current fraction of cases can be estimated from most of the remaining provinces. For Saskatchewan, the current fraction is assumed to be 10%.

Reporting and hospitalization follows from the infections, with probabilities and delay times estimated by calibrating to past data. This approach has performed well until recently, without the need to adjust parametrizations for the different variants. Recently there have been some departures from the hospitalization projections, not yet understood. The probability of an omicron infection to become severe for a vaccinated or naturally immune individual and the time spent in hospital for all individuals are multiplied by a factor 0.3. This reduction in severity for omicron infections might be considered optimistic.

The model fit to case data finds that omicron is producing about 66% of case on December 16, and growing at a rate of 25% per day. Analysis for each Health authority are reported in the BC analysis page. 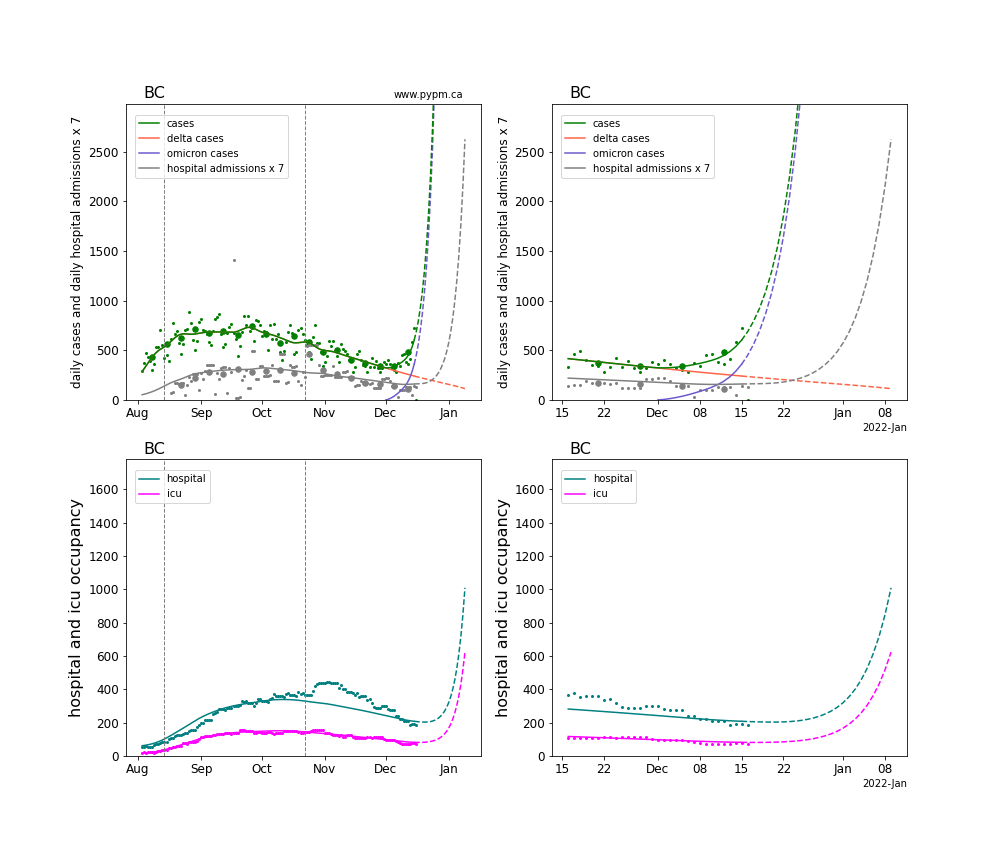 Starting August 2021, the change in testing policy, by nearly eliminating contact tracing, significantly affected the fraction of infections that are reported as cases. After August 1 2021, daily hospital admission data are used in place of cases to define the infection model for the province. The model curve for cases, shows the expected number of cases that would have been reported had contact tracing remained. Hospital admission data are in too low numbers to use to estimate omicron parameters, so the growth rate is assumed to be 25% per day, and the current fraction of cases is adjusted to match recent case data (now that contact tracing has returned). 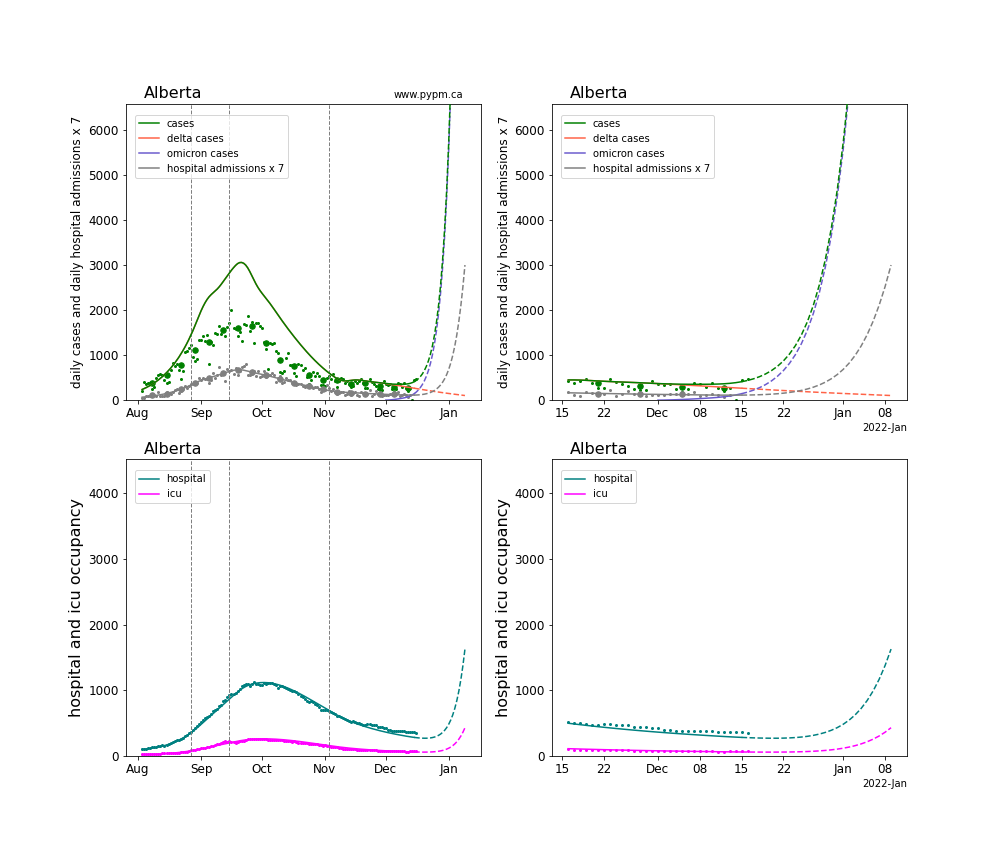 Omicron has not yet reached a proportion of cases in Saskatchewan to measure its parameters. An omicron growth rate of 25%/day is assumed and the current fraction of cases is assumed to be 10% 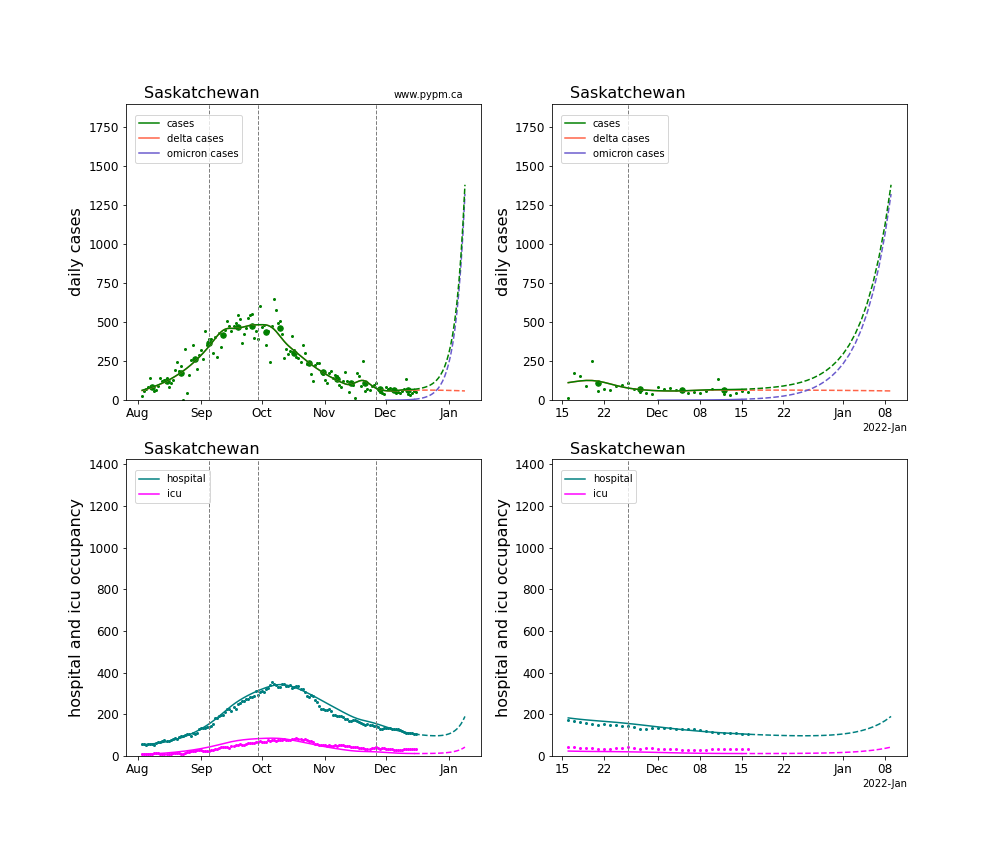 The recent upward departure from the previous trend of cases in Manitoba may be due to omicron. The omicron growth rate is assumed to be 25%/day and the current fraction of cases is estimated to be 22%. 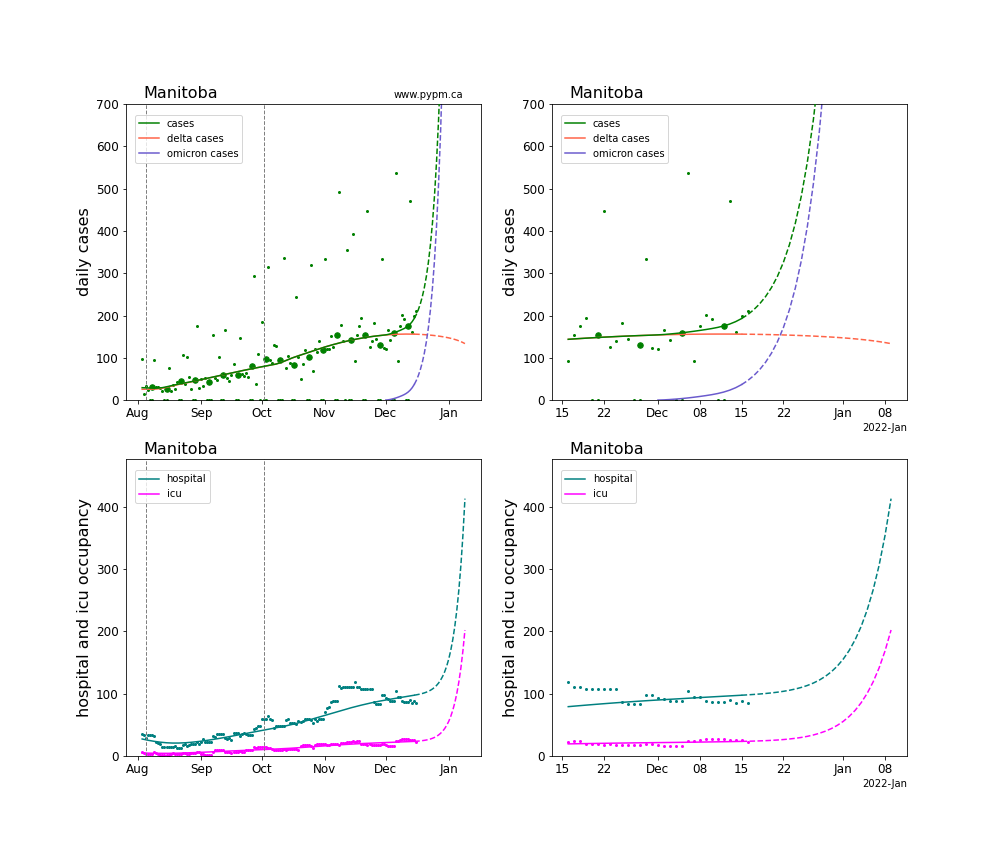 The model fit to Ontario data shows omicron currently growing at 26% per day and producing 46% of cases. 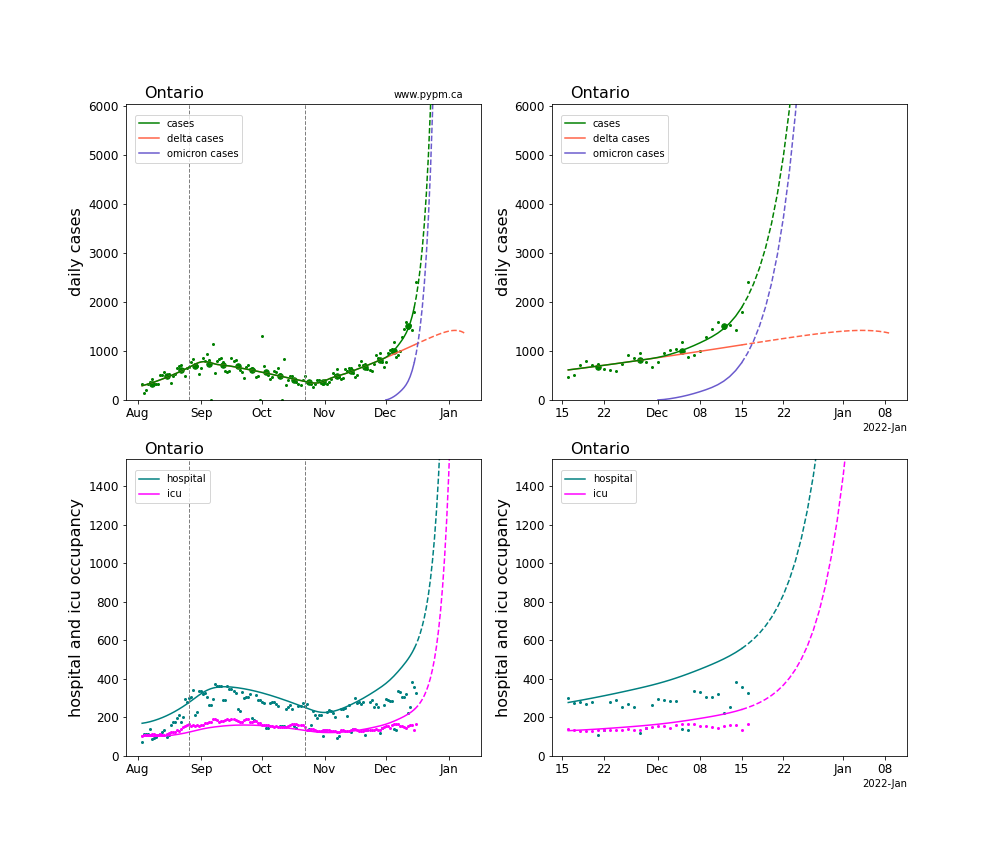 The interpretation of recent Quebec data is difficult, due to a recent outbreak followed by what appears to be a rise in cases from omicron. The omicron growth rate is found to be smaller than the other provinces, at 18% per day and omicron producing 54% of cases. 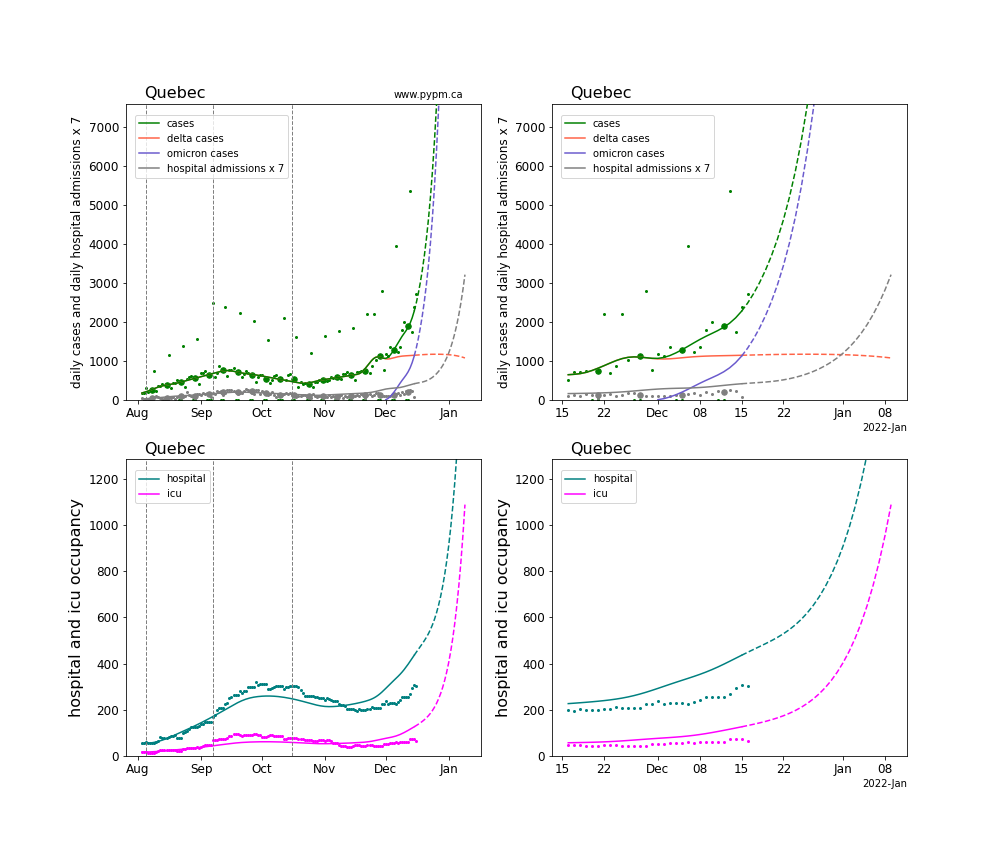 The effect of omicron appears to be significant, but with limited case numbers, only the current fraction is estimated from the case data, at 25%. 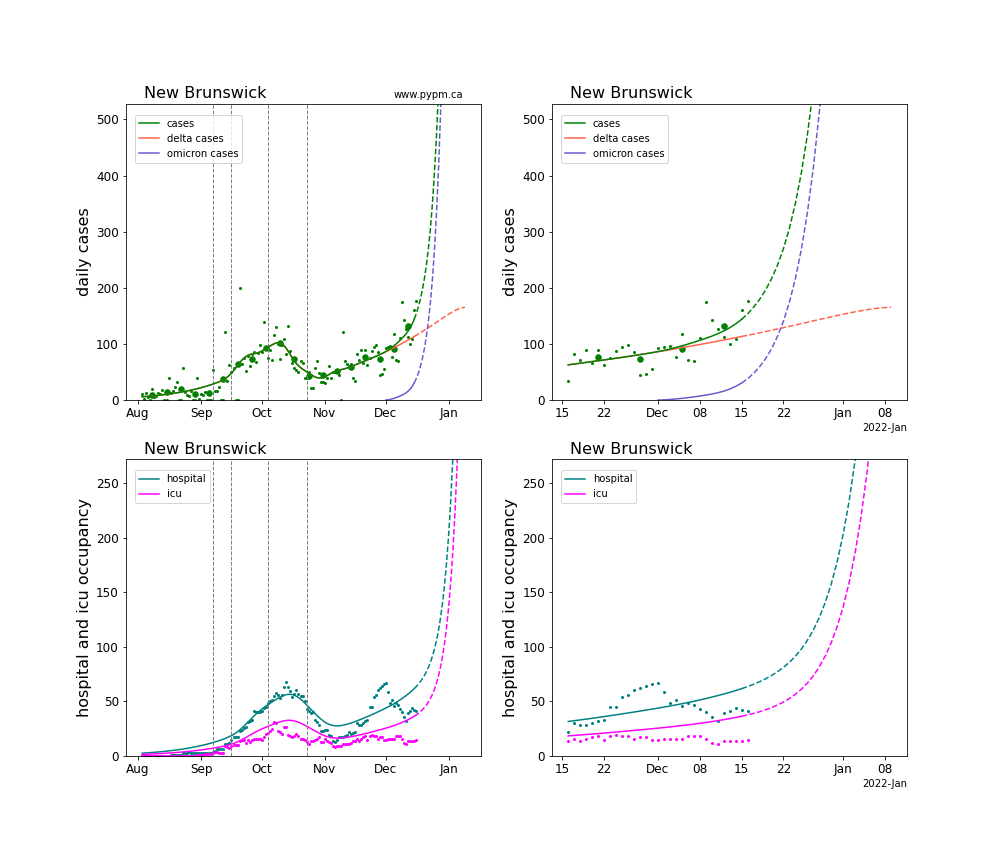 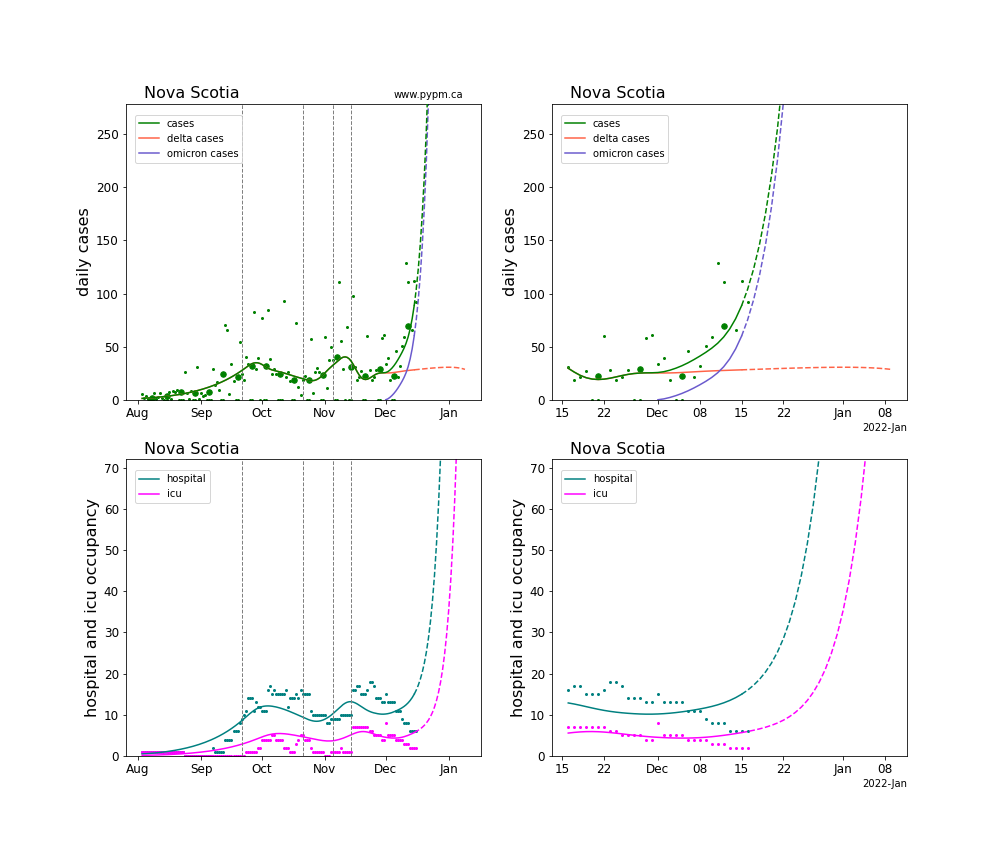 The model fit finds that omicron is producing 72% of cases. The growth rate is fixed at 25%/day.

The table below indicates the omicron growth rates (% per day) and current fracruib for each province. Values in parenthesis are not estimated from data, but instead indicate the assumed values. Uncertainties in these estimates are relatively large - no attempt to assess them, given the rapidly changing situation.